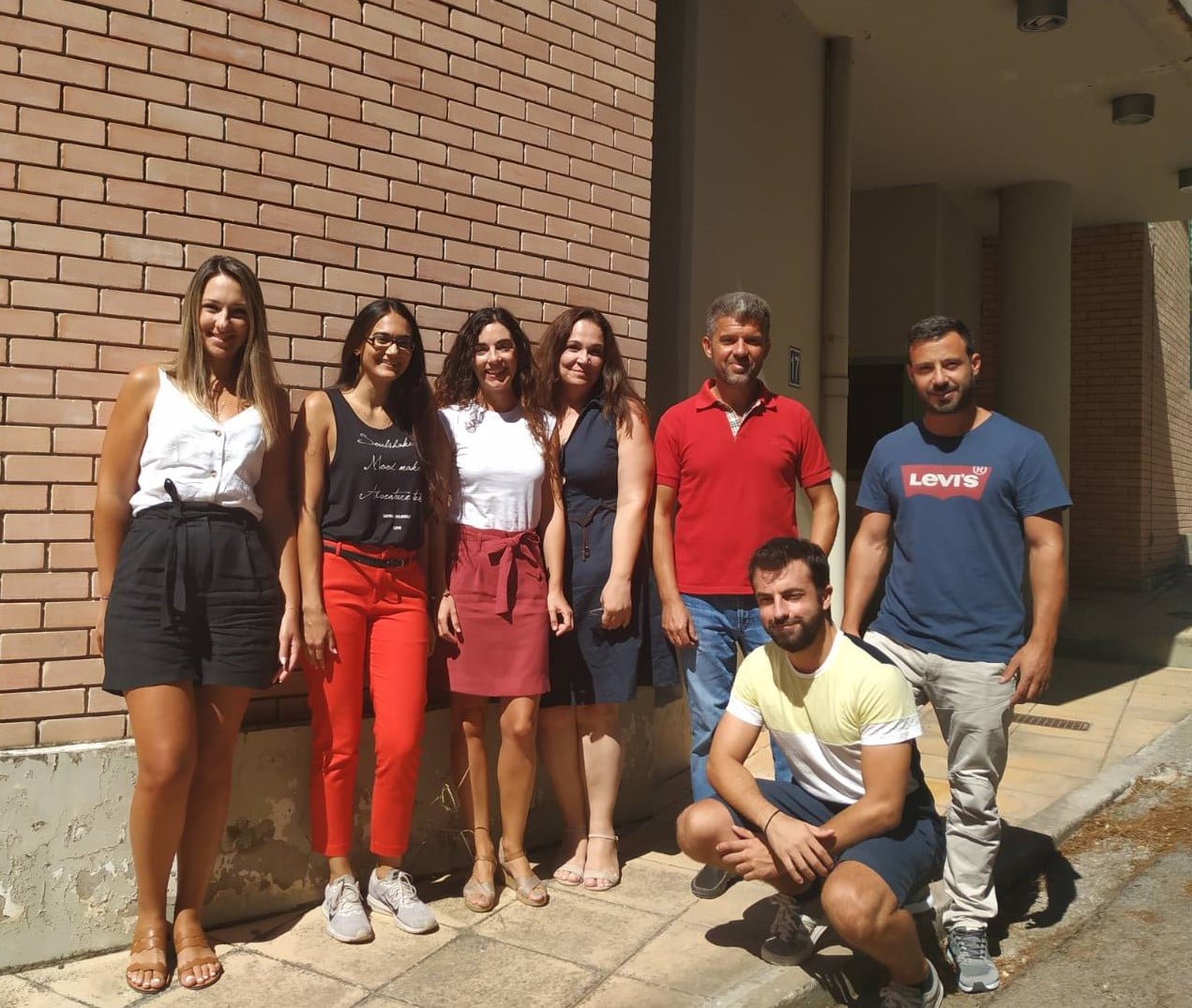 Head of the Airtech Lab

Thomas Maggos, M.Sc, PhD: Research Director. Head of the Atmospheric Chemistry and Innovative Technologies Lab (AirTec-Lab) of the National Centre for Scientific Research “Demokritos”. Following his basic studies in Chemistry at the University of Crete, he joined the University of Athens where he received M.Sc in Environmental Chemistry & Technology. He received his PhD in the Mechanical Engineering department of the University of West Macedonia. In 1998 he joined the institute of Nuclear Technology – Radiation Protection at the National Center for Scientific Research ‘Demokritos’ in Athens, working, innovative technological systems for the performance of air quality measurements in urban, indoor and occupational environment and on photocatalytic processes and applications for air pollutants abatement. He is Coordinator of LIFE+2019 “VISIONS” project and Principal Investigator (PI) of the HORIZON 2020 project named “ICARUS”. Furthermore, he participates in various European and National R&D projects such as FP7, LIFE+ & REGGPOT. He is member of CEN/TC264/WG15 (Particulate Matter PM10/PM2.5) & CEN/TC386/WG2 (Photocatalysis/Air Purification) working groups. He is in charge of the accreditation of AirTec-Lab by the Hellenic Accreditation System S.A (ESYD) under the terms of ELOT EN ISO 17025:2017 standard for specific gas pollutant measurements. He has also participated as national expert in authoring the Committee of the Regions (CoR) opinion on the COM(2012)39 of the European Commission titled “A REINFORCED ERA PARTNERSHIP FOR EXCELLENT AND GROWTH”. He is deputy coordinator to the Indoor TG of ERNCIP (European Reference Network for Critical Infrastructure Protection) since 2016 and deputy member of the management board of COST17136 INDAIRPOLLNET action. He has more than 80 publications in international peer-reviewed journals and more than 120 in international conferences.

Christos Vasilakos, Ph.D He holds a B.Sc. and a Ph.D. with distinction in Chemistry, having 25 years professional experience, and over than 13 years of working experience in the EU. He has held various managerial, advisory, scientific and political posts in European and National Institutions as well as Governmental Bodies. He started his career as a Research Associate in the Chemical Department of the University of Patras and since 1995 he spent nine years working in research in the National Centre for Scientific Research ‘Demokritos’, as the Head of Air Quality Group. In 2004, he appointed as a Counselor for Research, Technology and Space in the Greek Permanent Representation in Brussels, participating in the Research and Space Working Parties in the European Council, as well as in a number of European Committees.

In 2011, he joined the European Commission as a Policy and Project Officer (Seconded National Expert), working in the Unit for Research infrastructures and participating in the preparation of Horizon 2020. In August 2013, he appointed, by the then Greek Prime Minister, as the Secretary General for Research and Technology, and was in charge for the planning, management, coordination, funding, and communication of the National Policy for Research, Technological Development, and Space. The 1st semester of 2014 he chaired the European Competitiveness Council (Research and Space part). That period he also supervised and provided keynote speeches i 1n many high-level European events.

He joined NCSR ‘Demokritos’ back in 2015 and then he promoted in Director of Research. Since 2016, he works as a Strategy and Policy Officer (Seconded National Expert) in the Public-Private Partnership “Clean Sky 2 Joint Undertaking” the largest European Programme in Aeronautics R&I., while he holds his post in Air Tec Lab, in IPRETEA, NCSR “Demokritos’. In this functioning, he supports the Synergies Management and the relations with Member States and Regions, the State Representative Group, the preparation of the Aviation partnership in Horizon Europe, and other strategic programming activities. Additionally, he has published more than 130 articles in peer review journals, books, and conferences proceedings, with more than 1000 citations from other authors, and has provided many speeches and presentations in European, international and national conferences.

Dikaia Saraga MSc, PhD, Associate Researcher at the Atmospheric Chemistry and Innovative Technologies Laboratory (AirTec-Lab), is a physicist (University of Athens, 2004) with a master degree on Environmental Physics (University of Athens, 2006). She received her PhD (2010, thesis title: Particulate matter source apportionment in indoor air) from the Mechanical Engineering department, University of West Macedonia, Greece. She has been a scientific collaborator at Environmental Research Laboratory, NCSR ‘Demokritos’ (September 2002-today), University of West Macedonia, Mechanical Engineering department (2007-2013) and University of Athens, department of Applied Physics (2005-2006). Her full operating skills include air pollution, climatic and meteorological parameters monitoring; indoor environment quality (e.g. chemistry, ventilation, occupant comfort) study; application of reference methods for PM and VOC determination, ionic and OC/EC analysis; Receptor Modeling application (PMF, CMB, FA), application of statistical packages (SPSS, R, MATLAB). Her research interests focus on air pollution and climate change abatement as well as air pollution and population health relationship. She has participated in more than 25 European and National research projects in the field of indoor and outdoor air quality and climate change. Among them: ICARUS (Horizon 2020), VISIONS, AIRUSE (LIFE+), APICE (MED), BUMA, SINPHONIE and OFFICAIR (FP6, FP7), CLIMACT. She is an analyst at the accreditation of AirTechLab by the Hellenic Accreditation System S.A (ESYD) under the terms of ELOT EN ISO 17025:2017 standard for PM10, PM2.5 and specific gas pollutant measurements. She is a member of FAIRMODE group and a member of the management board of COST17136 INDAIRPOLLNET action. She is author of 50 publications in peer-reviewed journals, and more than 70 conference proceedings and scientific reports and guest editor in four scientific special issues.

Balla Dimitra MSc, PhD student is chemist (Aristotle University of Thessaloniki, 2013) with a master degree on ‘‘Chemical Analysis – Quality Control” (University of Athens, 2016). She is currently conducting her PhD at the Atmospheric Chemistry and Innovative Technologies Laboratory (AirTech-Lab) at NCSR ‘‘Demokritos’’ in collaboration with Environmental Pollution Control Laboratory of Aristotle University of Thessaloniki, Greece. The objective of her PhD is the ‘‘Study of Chlorinated Alkanes in the Atmosphere’’. She is working as a scientific collaborator in the Atmospheric Chemistry and Innovative Technologies Laboratory of the National Center for Scientific Research ‘Demokritos’ in Athens (October 2018-today). She has also worked as a research scientist in the Environmental Pollution Control Laboratory of the Aristotle University of Thessaloniki, (2014-2018). She has long experience in air quality measurements, analytical assay techniques for persistent and other pollutants, good handling of analytical instruments GC-MS, GC-ECD, IC, MAE, TOC, UV-Vis spectrophotometer, fluorometer, and experience in statistical processing of results. She has been involved in the European research program THALES. She is author of 4 publications in peer-reviewed journals, and 6 conference proceedings and scientific reports.

Panagiotis Panagopoulos M.Sc is an Environmental Manager (2011, University of Patras, Patras Technical School) with a master on Chemistry, Technology and Environmental Management (University of Athens, 2017). Since 2014, he has collaborated with NSCR Demokritos and he has participated in the following European and national R & D projects: ICARUS ‘Integrated Climate forcing and Air Pollution Reduction in Urban Systems’ (Horizon 2016-2020). Establishing a multidisciplinary and effective innovation and entrepreneurship hub Development and Implementation i. analysis of greenhouse gases and ii. photocatalytic techniques for degradation of gaseous pollutants. Conduct of epidemiological research and assessment of environmental parameters at IWMF (Waste Management Integrated Facilities) of West Attica and its wider area. His expertise covers experimental study of indoor and outdoor air pollution, air quality measurements, chemical analysis, photocatalytic processes, urban and indoor environment. Furthermore, he has participation in Environmental Services to Public and Private sector: Air quality measurements in ambient air and indoor microenvironments (i.e. schools, hospitals, residences, industries, museums and archives, public buildings, means of transport).

Maria Dasopoulou Msc is a chemist (University of Ahens, 2015), with a master degree in Chemistry, Technology and Environmental Management (University of Athens, 2018) with research topic: << Comparative survey of chemical consistence PM10 in PAHs in areas of specific interest and estimation of contribution of sources, using a receptor model (PMF)>>.She has been a scientific collaborator at the Atmospheric Chemistry and Innovative Technologies Laboratory (AirTech-Lab) at the National Center for Scientific Research ‘Demokritos’ in Athens (June 2016-today). Her research interest focus on suspended particulate matter analysis for determination of organic pollutants using analytical techniques (GC-MS, GC-FID, GC-PID, HPLC, OC/EC) with participation in research projects such as: ICARUS (Horizon 2020), AIRUSE (LIFE+). She has excellent computer skills and very good knowledge of English.

Demetra Pardali M.Sc, PhD Candidate in the Department of Physics of the National and Kapodistrian University of Athens. After her basic studies in Physics at the Physics Department of NKUA, with a province in “Electronic Physics and Systems”, she continued at the same faculty where she received M.Sc in “Environmental Physics” in 2018 focused on air quality. In the framework of her diploma thesis, which was in collaboration with the Atmospheric Chemistry and Innovative Technologies Laboratory (AirTech-Lab) of the Institute of Nuclear & Radiological Sciences and Technology, Energy & Safety (INRASTES) of the National Centre for Scientific Research “Demokritos”, she participated in the design of an experimental campaign, conducted measurements in workplaces and trained in sampling and analyzing particulate matter, volatile organic compounds and organic pollutants in order to characterize indoor air quality and assess occupational exposure. At present, she continues her collaboration with the AirTech-Lab of NCSR “D”, where she conducts her PhD research regarding the assessment of urban population exposure (vulnerable groups) to indoor/outdoor air pollutants and the risk of possible health effects. In the framework of the aforementioned, she participated in the European and National research project ICARUS (Horizon 2020), where she conducted measurements for the Athens Campaign. In parallel, she is also engaged in other European and National research projects as a member of the R&D team of a technology research and development Irish firm, such as NAIADES (Horizon 2020), FACTLOG (Horizon 2020) and KYKLOS 4.0 (Horizon 2020).

Asimina Stamatelopoulou M.Sc, PhD: is a physicist (2006-2010) with a master degree (2011-2013) on Environmental Physics and Meteorology and a PhD thesis (2014-2018) from the Department of Physics of the National and Kapodistrian University of Athens. The objective of her PhD thesis was the exposure assessment of vulnerable subpopulations to environmental factors and prediction of their possible health effects. She is working as a research scientist in the Atmospheric Chemistry and Innovative Technologies Laboratory (AirTech-Lab) of the National Centre for Scientific Research “Demokritos” (2013-now). She has also worked as an associate laboratory assistant in the Thermodynamic Physics Laboratory of the Department of Physics of the University of Athens (2011-2012). She has extensive experience both in large-scale monitoring of organic and inorganic pollutants and airborne particulate matter, as well as in chemical analysis techniques of environmental samples. In addition, she has valuable experience in creating and using statistical models for linking air pollution with adverse health effects (eg respiratory and cardiovascular problems) on humans. Moreover, she has extensive experience in big data statistical analysis, as well as in organizing and carrying out sampling campaigns that she gained from participating in major European programs that link the environment to human health (eg. ICARUS – Integrated Climate forcing and Air pollution Reduction in Urban Systems, HEALS-Health and Environment wide Associations based on Large population Surveys). Her scientific experience is summarized in 7 publications in scientific journals and 1 in a scientific book, 2 papers which are under review and 2 which are in submission process, as well as 22 announcements in international scientific conferences.

Vassilis Galifianakis works as a Project and Financial Manager at the Atmospheric Chemistry and Innovative Technologies Laboratory (AirTech-Lab), at the National Center for Science and Research “Demokritos”. He has great experience on LIFE projects as Project/ Financial Manager (ACEPT-AIR, AIRUSE, INDEXAIR, NANOEXPLORE, NANOMONITOR and VISIONS).

He has studied Urban-Spatial Planning and Regional Development at the University of Thessaly and continued with postgraduate studies at the National Technical University of Athens obtaining a Master’s Degree in “Architecture – Spatial Design”.

Vassilis has been participating in a significant number of National and European research programs as a Research Associate of the Universities of Thessaly and Piraeus, covering a wide range of issues. He has also a great experience as a Business Consultant providing specialized consulting services to companies and organizations in the Private and Public Sector.